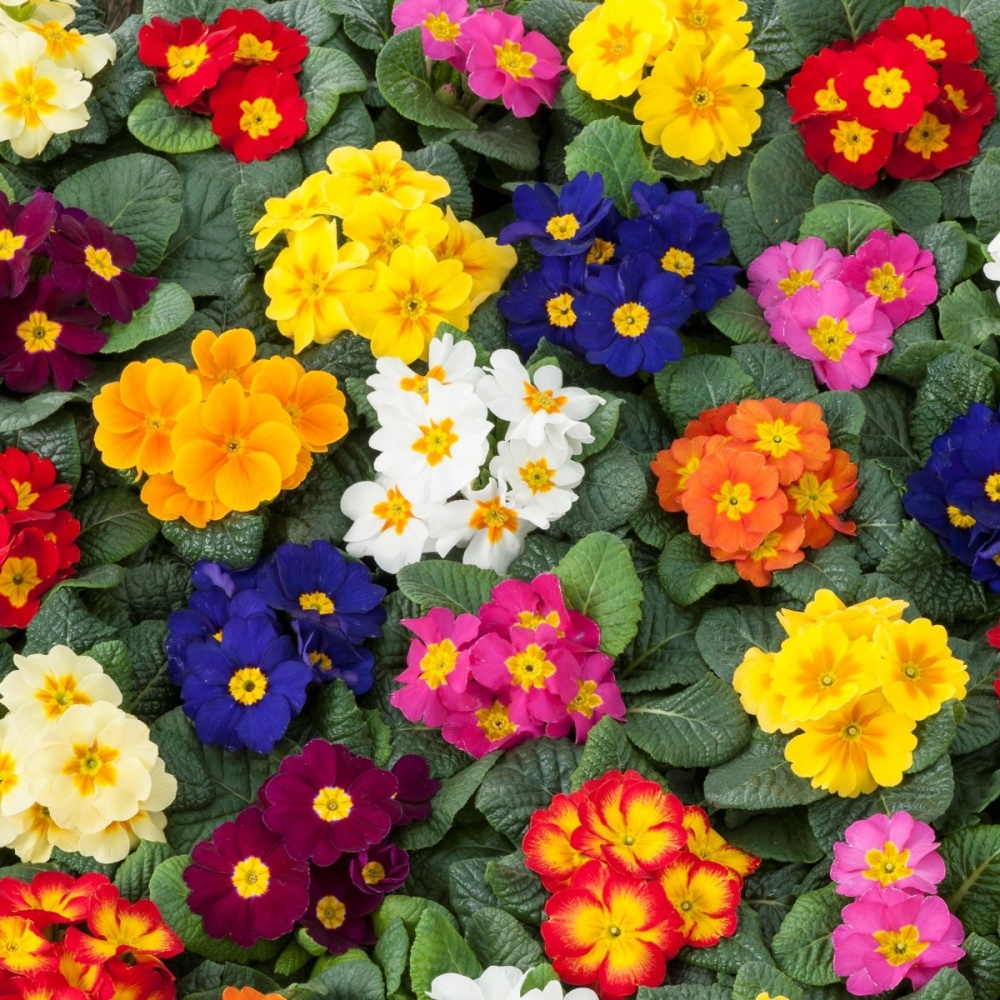 Every season can fill you with positive emotions, but winter predisposes to sad thoughts. Everything then seems to be dilapidated and slightly devastating, people are more closed, most flowers are “sleeping winter sleep” and silence is everywhere. In order to “relax the setting” nature has created the delicate palette of primrose colours.

The flower blooms in February until May. It will definitely improve the melancholy mood. The Latin primrose name is Primula, which comes from “prime”. The literal translation means the first, which suggests that it is among the forerunners of the spring. The primrose belongs to perennial herbaceous plants and numbers over 400-500 species. The colourful plant is part of almost every home, it is grown indoors, on the balcony or in the garden.

Interesting facts about the primrose

Did you know that there is a special flower day? “Primrose Day” is reported on April 19th to celebrate the anniversary of the British Prime Minister Benjamin Disraeli whose favourite flower was the primrose. Thus, instead of a bad memory, it is sealed as a holiday.

Legends are written about the primrose described as a saviour

The story is related to the eruption of the volcano on the island of Java, always followed by many casualties. The flower managed to stop this disaster. The so-called “royal primrose” blooms every time on the eve of the volcano, It gave the inhabitants a sign to leave their settlements. The primrose is a loved flower that is present in people’s home. Thanks to the primrose, it is not necessary to tear live flowers for exquisite bouquets that do not last long as they look just like small little bouquets in different shades

In larger species, there is a difference in the structure, size and colour of the primrose. Overall forms are very interesting and attractive. Primula is the Latin name of the primrose, but among such popular are “Darling of April”, “Golden stars”, “Spinkie” and many others.

The primrose shows that soon everything around will blossom. In Switzerland, it is considered a symbol of love for the country. It is a tradition to have dried primrose when leaving the country as a talisman. In Ukraine, it is considered a guardian of mischief, and so the primrose often meets sheltered clothing. In folk traditions, she played the role of an amulet by a bunch of twigs.

The primrose is still considered a guardian of bad eyes and even spells. the primrose shows love and gentle feelings between two young people, symbolising hope and pure thoughts among people. The use of primrose for curative purposes comes from the ancient Greeks, they called it “the flower of Olympus” or “the flower of the twelve gods” because it was believed to heal all the diseases.

Application of the primrose

It is used for healing purposes – it has a diuretic action, it helps with expectoration and mental illness. Medicine finds benefit in every part of the plant – the roots, the rhizome, the leaves and the flowers. The roots are collected in April or June, they help in expectoration and in stomach secretions. They are used as part of the treatment of bronchitis, bronchial asthma, spikes, urinary tract inflammation, and others. The leaves are collected in March and June and help relieve headaches, tiredness and deficiency of vitamins A and C. Colours are available in March-May and are widely used to relieve insomnia, nervousness and headaches.

Sometimes unconsciously, you fall into stressful situations that act badly on your psyche.

You are probably wondering that there is no special reason for your bad mood. It has been shown that the primrose has a healing effect on bad moods. It has a sedative action that helps improve the functioning of the nervous system. This is obtained by taking it as a herb or by prolonged observation of the flower. Trust the magical properties of the primrose

It is used in the culinary industry – besides its extensive application, the primrose is also present at the table

The flower is recognised not only by its beautiful appearance but also by the taste that becomes traditional for some peoples. The leaves are used in the raw state and in the form of powder. Fresh leaves are an ideal part of all the variety of salads that you get. England and the Netherlands have long since discovered the taste of the plant and cultivated it as a salad.

The powder from the leaves is sprinkled on the first dish on the table. you can use the leaves in combination with spinach, green salad, iceberg and more. You can make your next unique masterpiece and impress your guests by using primrose leaves.

It is used as a decoration

The primrose can serve ideally for the inner and outer parts of a home, the most frequently used idea is the flowers (mainly artificial) being placed in pots or baskets. They can be standing or hanging for an even more interesting accent. Each element contributes to the theme and emphasises your personal style. The primrose will bring a sense of cosiness to your home as well as pleasant emotions through the natural look. Take the opportunity to enjoy “live plants” in the winter. Place a wicker basket on the porch, in which the flower will resemble a bouquet.

A care guide for the favourite flower

How to grow a beautiful primrose? What should we do from the moment of planting to the appearance of flowering? What soil and location are most recommended? You need to answer these questions before taking a step toward positioning the flower in the garden.

The primrose is easily recognised by the short filamentous rhizome, the upright and short stalks and the jagged, mossy ovate leaves. The different varieties give the mystery of the variety of yellow, orange, pink, purple, blue, red and other colours. Saturated colours that attract attention with well-shaped bouquets over the leaves.

The primrose grows best in the open, even though it is often found in the home. In the beautiful chests and in the garden beds it feels most comfortable. The plant is among the warm-hearted, so it requires a lot of light and be sun-shining. If you do not have a garden and you have decided to grow it indoors, ensure good conditions – southern, eastern or western ledges. If you just put it in the yard, it should be in a stretch that suns in the spring and a little shadier in the summer. The primrose will be partially lighted, but it will not perish from the direct rays during the hot summer. This will give you the necessary light and warmth

The primrose is known to love the sun, but not the heat. Although it can withstand warmth, it mostly “dreams” about moderate temperature. Spring and autumn days are no problem for them – the climate is suited to their lively development. Winter should aim at a temperature in the range of 5-10 degrees. The good thing is that it can survive up to 28 – 30 degrees in the summer, above that the life of the delicate flower becomes more painful.

Irrigation is one of the greatest concerns of the primrose. Wet soil is the number one factor you must adhere to, It is most often watered during growth. Subsequently, soak up abundantly and regularly in the summer and a little less in the winter. Unlike other types of vegetation, watering is almost never superfluous. The primrose loves the humid air, for this, you can place it with a pad of water to “breathe” the vapours (if it is in the pot) or you can spray its leaves from time to time. However, you must be careful that the carrots do not directly foliage.

No matter how much you water the flower, it will not be effective if the soil is not well-drained and permeable. It is necessary to perform preliminary drainage, feeding and aeration this would help the garden mix for flowering balcony flowers, as well as peat. Make a mixture of them with equal parts of sand for drainage and garden soil. You must be extremely careful about fertilising. Humus-rich soil will give more colour, so use mineral fertiliser 1-2 times a month.

Keep in mind that salts have a great influence on the development of the primrose – their excessive quantity or lack thereof.  For this reason, you should use iron-containing ones. To maintain a higher temperature of the primrose soil in winter, groom it in the yard and cover with peat moss.

The transplantation is done by dividing the tufts after the blossoming of the flowers. Propagation follows the next year in the first spring days in order to be sure that it will not freeze. It is made by seeds which are placed on the prepared soil of damp peat, then covered with the soil from the garden. The initial stage of plant adaptation requires a more shady place. Once accustomed it is good to be warm and watered more often. This will stimulate growth.